1
0
0
The global organic food & beverage market size is expected to reach USD 320.5 billion by 2025, according to a new report by Grand View Research, Inc. Growing popularity of non-GMO products among consumers, owing to the health benefits associated with their consumption, is expected to drive the demand over the forecast period.
Fruits and vegetables dominated the global organic food market accounted for over 37% of revenue share in 2015. Furthermore, increasing consumption of meat and poultry products resulted in the fastest growth of the segment and is expected to grow substantially at a CAGR of 13% over the forecast period.
Non-dairy beverages such as rice, soymilk, and oat beverages accounted for over 33% of the total share of organic beverages market in 2015. However, beer and wine is projected to grow substantially at a CAGR of 13.5% over the forecast period owing to increasing global economic conditions and high consumption of a broad range of flavored beverages.
U.S. organic food market revenue by product, 2014 - 2025 (USD Million) 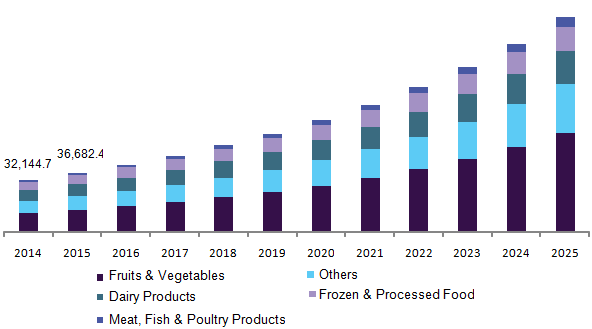