0
0
0
A recent study by Transparency Market Research (TMR) forecasts that the global fermentation chemicals market will grow at a moderate CAGR of 5.4% from 2013 to 2019. TMR, a leading market intelligence firm based in the United States, in its latest market report says that the revenue generated by the global fermentation chemicals market was valued at US$41,567.7 million in 2012, and will surge to US$60,123.9 million by the end of 2019. The report is titled ‘Fermentation Chemicals Market - Global Industry Analysis, Size, Share, Growth, Trends and Forecast, 2013 – 2019.’ 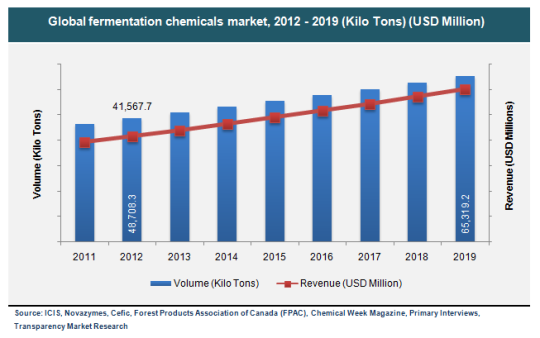 Based on regional analysis, the regional segmentation includes the current and forecast demand for different regions such as Asia Pacific, North America, Europe, and Rest of the world (RoW). Among the various geographies, North America represents the most significant and largest market for the fermentation chemicals industry. In the recent past, growth in this market throughout this region was driven by surging growth in the pharmaceutical market in the U.S.

On the other hand, Asia Pacific is the second largest market for fermentation chemicals, subsequently followed by Europe and RoW. Due to the trending market saturation witnessed in the European and North American markets, Asia Pacific region is expected to be the future potential market until the end of the forecast period.