0
0
0
A recent report by Transparency Market Research (TMR) suggests that the global ferroalloys market is fragmented among various businesses across the globe. The report also suggests that there are possibilities that certain companies can gain dominance over their competitors as a result of various strategic steps taken by major businesses. To get a competitive edge over their competitors, businesses are getting involved in strategic acquisitions of various small and medium companies, collaborations and mergers, and also in events like brand promotions and product launches.

TMR report offers an in-depth analysis of global ferroalloys market. It also provides its expert review on various facets, drivers, segments, challenges and opportunities that businesses can leverage in the market. According to the report, the global ferroalloys market is expected to grow substantially with a CAGR of 5.9% in forecast period of 2017 to 2025. In terms of revenue the ferroalloys market shall rise from US$112.8 mn in 2016 to US$188.7 mn by the end of 2025. 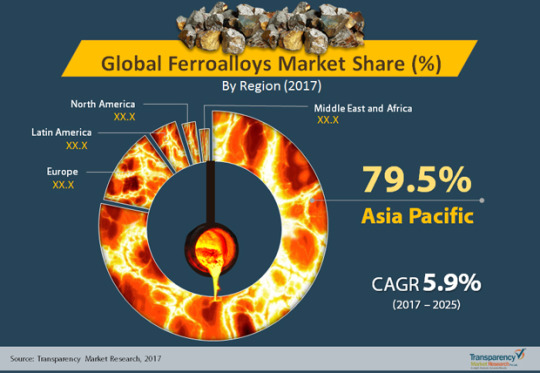 TMR reports that Asia Pacific is expected to be the leading region of the ferroalloys market in the forecast period. This is because the region accounted 79.5% of overall demand in the global ferroalloys market in 2017. The region is likely to showcase the same potential throughout forecast period and maintaining its top position. The report also state that the region shall also exhibit the highest CAGR from 2017 to 2025 in ferroalloy market.

Stringent Regulations with Respect to Pollution May Create Some Challenges