0
0
0
The global automotive tinting film market size is expected to reach USD 4.46 billion by 2025, according to a new report by Grand View Research, Inc. It is projected to expand at CAGR of 5.1% over the forecast period. The major factor driving the demand for automotive tinting films is the increasing global automotive production. The demand for passenger vehicles has witnessed substantial growth, primarily from Asian countries such as India, China, and Japan.
The demand for passenger vehicles has seen an upsurge in developing economies on account of rapid urbanization and increasing working population and disposable income. This is expected to positively impact the product demand over the forecast period.
However, various regulations regarding the Visible Light Transmission (VLT) are expected to restrain the market growth. In addition, onset of Chinese tinted glasses in the global market is expected hamper the demand for tinting films.
Tinting films help reduce solar heat gain and winter heat loss and maintain sustainable and comfortable environment. In addition, the use of Ultra Violet-A filtering tinting films reduces the risk of skin cancer and skin damage. Environmental benefits offered by these films along with rising safety concerns among consumers is expected to drive the market.
The market is characterized by the presence of a large number of players. The competitive rivalry is quite intense in the automotive tinting film market owing to the presence of several large and small players. Constant growth of automotive industry is anticipated to further fuel the rivalry among competitors in near future. 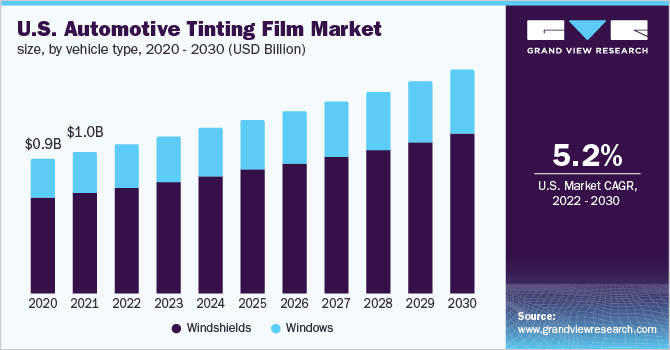