0
0
0
The global ammunition market size is expected to reach USD 27.64 billion by 2027, according to a new report by Grand View Research, Inc. It is projected to exhibit a CAGR of 3.9% during the forecast period. The rising demand for defense equipment in militaries owing to increasing geopolitical tension across the globe is expected to drive the demand for ammunition.
The Indian Army is planning to increase the number of artillery and mortar platforms over the next ten years through indigenous development programs and foreign procurement thereby contributing to the demand for ammunition over the forecast period. In addition, rising hostilities in Middle East nations are expected to supplement the regional demand.
Advancements in ammunition technologies, such as the replacement of brass-case bullets using polymer-case bullets are projected to offer notable growth opportunities to the market. The use of polymer material is projected to reduce the weight of ammunition by 40%, while maintaining its impact, thereby making it lighter and consistent as compared to conventional bullets.
Rising warlike situations supplemented by heightening geopolitical pressures across the globe is leading to an exponential rise in stockpiling trends in the global ammunition market. This strategy is expected to offer notable cost savings, since the ammunition can be purchased in high volume at cheap prices, thereby posing positive growth trends for the market. 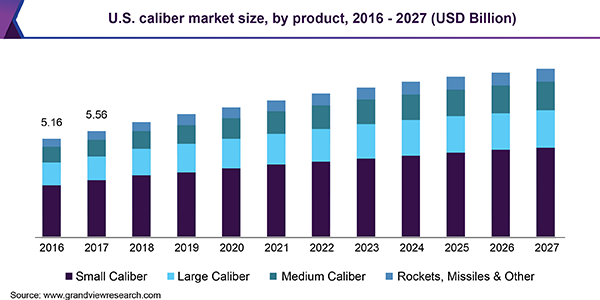