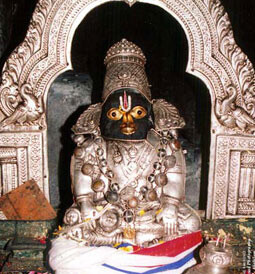 What is Saligram Shila?

Saligram or Shaligram Shila is a natural sacred stone, found only in the Gandaki Kali River in Nepal. The term Shila means stone in Hindi. However, scientifically it is a Black color Fossil. It is usual for the Pandit(Hindu priest) to bring the Saligram Shila for worshipping during Satya Narayan Puja in Hindu homes. The Saligram Shila is the representation of Lord Vishnu, the preserver of creation, and everything that is there. Shaligram Shila is reverently worshipped by Hindus, especially by the Vaishnava sect.Â

Vishnu Shaligram has distinguishable markings, which is a characteristic of this natural stone, in a spherical shape. The markings on the stone are interestingly similar to Lord Vishnu's Shakh (Conch), Chakra (Discus), Gada (Mace), Padma (Lotus). The change in the sequence of these markings is interpreted as different forms of Lord Vishnu. For example, if the markings are in the sequence Gada, Padma, Shankha and Chakra then it is Govinda, Padma, Gada, Chakra, Shankha is Narayana.Â

The Saligram Shila, with different markings, is also identified as the various forms of Lord Vishnu, like, Narasimha, Varaha Dev, etc. Though the Vishnu Saligram is Black, there are other colors like Brownish Red, Yellow, Red, etc. The Black Saligram Shila is most worshipped and is accepted by the Vaishnavs

The Story of Vishnu Shaligram or Saligram Shila.

The Garuda Purana and other ancient sacred Hindu texts mention the importance and benefits of worshipping the Divine Vishnu Shaligram. The merits which can be earned by worshipping the Saligram Shila are immense. There are different versions of the story.

The sacred Shaligram Shila legend narrates how Lord Vishnu had to trick His greatest devotee Vrinda.

Â Jalandhar was born out of Lord Shiva's Third Eye, the anger of Lord Shiva due to an incident with Lord Indra (King of Heaven). Discovered byÂ Lord Brahma as a baby who rose in the ocean Jalandhar, grew up to be extremely powerful and later arrogant. He was also crowned King of Asuras (Demons). He used his powers to harass Earth beings and later set his eyes on Heaven too. He got married to Vrinda who was the greatest devotee of Lord Vishnu. She was such a dedicated devotee of Lord Vishnu that He granted Her wishes, always. Vrinda was also a dedicated wife to Jalandhar.Â

When Jalandhar set His eyes on Heaven, the Gods and Demi-Gods, who had by that time come to know the actual source of Jalandhar, went to Lord Shiva to get a solution as only He could deal with His creation. However, Lord Shiva soon realized that Jalandhar was too powerful, which was highly promoted by Vrinda's devotion to Lord Vishnu. Lord Shiva and Jalandhar decided to fight each other.Â

The arrogant Jalandhar even went to the extent of changing His physical form to that of Lord Shiva and approached Â Goddess Parvati, Lord Shiva's consort. The Goddess took no time in understanding that he was not Her husband and charged him with Her sword. Knowing that Goddess Parvati was a powerful warrior and realizing that he had been caught, took flight.Â

It was decided by Lord Shiva that Jalandhar had to be finished else he would plunder everything and claim supremacy over Heaven too. He took up Jalandhar's challenge of battling.Â

On hearing this, Vishnu ji understood that His ardent and greatest devotee Vrinda had to be stopped from praying for her husband, Jalandhar's victory. So, on the morning of the battle between Lord Shiva and Jalandhar, Lord Vishnu shifted shape to Jaladhar's physical form and went to Vrinda saying that He had won over Lord Shiva. That was the time when Vrinda was starting to pray for Jalandhar. She was surprised that Jalandhar had already come back victorious. At this precise time, on the battlefield Lord Shiva pierced His Trishul through Jalandhar, putting an end to his life. Lord Vishnu as Jalandhar was successful in His mission.

When Vrinda realized the truth, furious at being tricked by her beloved God, she cursed Lord Vishnu to turn into a stone as He had behaved like a stone and not protected her husband. Lord Vishnu willingly accepted the curse and turned it into a stone which is believed to be the Vishnu Shaligram.

The Vishnu Shaligram requires no energizing, as Lord Vishnu resides in it. It is worshipped by performing Abhishekam with Tulsi Water and a mixture of Cow Milk, Curd, Sugar, Ghee, and Honey. The meritorious stone has been revered since ancient times. The Saligram Shila is respectfully kept in a box, and taken out daily to worship.Â