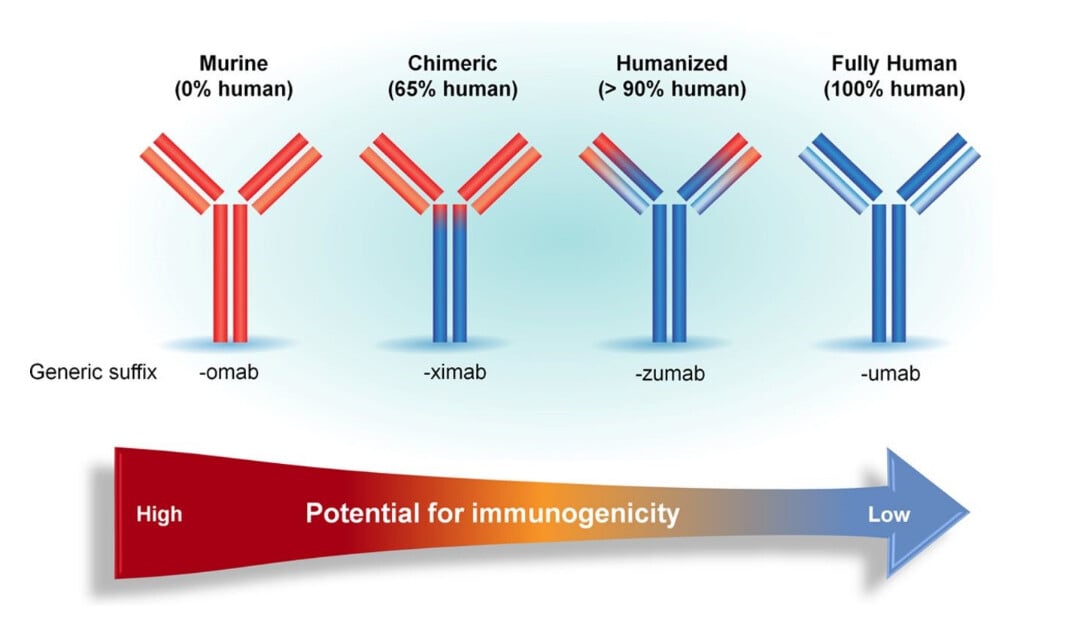 The concept that cancer cells express certain potential target antigens paves the way for humanized antibodies as a therapeutic strategy for malignant tumors. Antibodies can interact with immune cells through the Fc domain of antibodies to target and destroy tumors that express specific antigens. Depending on the type of antibody, this immune cell-antibody interaction can lead to tumor cell death in various manners, including complement-dependent cytotoxicity (CDC), antibody-dependent cytotoxicity (ADCC), and antibody-dependent cellular phagocytosis (ADCP).

Köhler and Milstein won the Nobel Prize in Physiology or Medicine in 1984 with their hybridoma technology that has promoted the development of many anti-tumor mAbs and has greatly affected cancer therapeutics in the past decades. The first antibody in tumor therapy rituximab is still widely used, which targets CD20 and was initially approved by the FDA for CD20+ non-Hodgkin's lymphoma in 1997. By now since its approval, it is still used to treat the vast majority of B-cell non-Hodgkin's lymphomas, and has now been approved for the treatment of chronic lymphocytic leukemia, rheumatoid arthritis, and certain autoimmunity diseases such as pemphigus vulgaris.

There are currently more than 500 approved and researched mAbs designed to treat solid and hematological malignancies, as well as benign blood diseases, autoimmune diseases, and chronic diseases, which, however, are currently the mainstream of cancer therapy, there are still many challenges. Due to the dynamic nature of cancer cells and their continuous mutations, any acquired anti-monoclonal antibody resistance will lead to treatment failure.

Antibody-drug conjugation (ADC) is an effective strategy, which couples a cytotoxic small molecule drug to a mAb through a reasonably constructed chemical linker, which can selectively deliver effective cytotoxic drugs into tumors. T-DM1, the microtubule disrupting agent emtansine is coupled to trastuzumab. This ADC is internalized into the cell after binding to the HER2 receptor and then acts through degradation, leading to the release of DM-1, which further leads to cytotoxic cell death. T-DM1 is currently approved for metastatic HER2+ breast cancer after trastuzumab and taxane treatment, and early HER2+ breast cancer with adjuvant therapy after trastuzumab treatment. ADC drugs such as T-DM1 provide promising options for patients with malignant tumors. mAbs are still one of the most exciting and evolving areas in cancer therapy.

CAR-T cell therapy is a cutting-edge treatment of hematological malignancies in recent decades. In the early 1990s, Eshhar et al. tried to circumvent the limitation of T cell silencing caused by the tumor microenvironment. In doing so, they developed the first chimeric antigen receptor, paving the way for novel cancer therapies. The first CD-19-targeted CAR-T cell was approved in 2017 for relapsed refractory acute lymphoblastic leukemia. CAR-T cells are revolutionizing the treatment of hematological malignancies as they show a response rate of up to 94%.

Although mAbs have become the mainstay of cancer treatment, bsAbs can produce a stronger immune response and a more targeted anti-cancer effect. bsAbs have two independent antigen binding sites. In T cell-directed therapy, one binding site promotes T cells, and the other attaches to tumor-specific antigens. Blinatumomab targets both CD3 and CD19 and was approved for Ph-negative relapsed or refractory B-cell acute lymphoblastic leukemia in 2014.

There are currently two approved cancer prevention vaccines, i.e. human papillomavirus (HPV) vaccine and hepatitis B virus (HBV) vaccine, both of which target the carcinogenic HPV16 and HPV18 viruses that cause 70% of cervical cancer cases.

The use of vaccines for treatment rather than prevention is quite unique in the field of oncology. Bacille Calmette-Guerin (BCG) has been widely used to treat non-muscular invasive bladder cancer (NMIBC) for 40 years. The current FDA-approved therapeutic cancer vaccines include Sipuleucel-T (a dendritic cell-based vaccine used for mild-symptomatic metastatic castration to resist prostate cancer) and T-VEC (an oncolytic virus vaccine derived from HSV-1 in the lesion for unresectable recurrent melanoma).

Oncolytic virus therapy is a fairly novel immunotherapy that uses viruses modified in the laboratory to attack and infiltrate malignant cells, which act by directly lysing tumor cells and activating innate and adaptive immune mechanisms. Previously approved oncolytic virus treatments include Rigvir (2004, Latvia) and Oncorine (2005, China). However, it is worrying that these drugs can cause adverse reactions in healthy tissues. Talimogene laherparepvec (TVEC) was the first oncolytic virus approved in the United States. In mechanism, TVEC inhibits the protein kinase-R (PKR) pathway and up-regulates type 1 IFN, which allows the virus to directly attack cancer cells and induce immunogenicity. Currently, TVEC has been approved for advanced melanoma (stage IIIB-IV) based on a randomized controlled phase III trial, which showed improved ORR and long-lasting response.